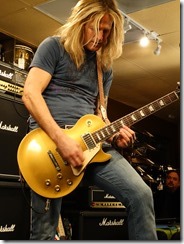 A bunch of Marshall Amps at GODPSMUSIC

Before introducing Doug Aldrich, Nick Bowcott of Grim Reaper Fame (and a bigwig at Marshall) came out and played a few tunes on the guitar and told a very inspirational story about Jim Marshall and how he ultimately became the household name in guitar amplification.

Here’s the ultimate music store  “Can I help you?” riff:

Doug was my guitar teacher in the late 80s.  In fact, there were several of his old students in attendance at this event.    Doug was already considered a huge guitar player in Japan when he had tons of students and played mostly local gigs.   Just getting to see him play each week was a great experience.      During this time, he could be seen in Lion videos on Headbangers Ball, in full page guitar ads in all the major guitar mags and this is also when he initially declined the Dio gig.  Shortly thereafter, he joined Hurricane.      I’ve seen Doug with Lion, Hurricane, Whitesnake and jamming with Brian Tichy, Michael Devin and Keith St. John.  He truly is one of the nicest people you could ever meet and is a complete monster on the guitar. 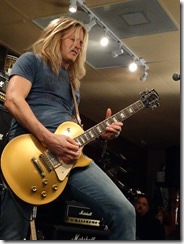 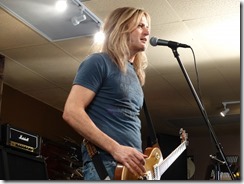 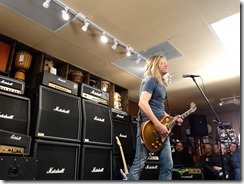 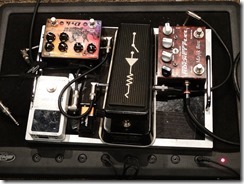 Doug playing some custom neat-o guitar.  He ripped some slide on it. 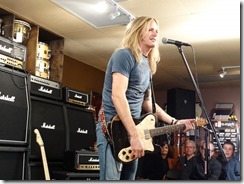 Doug showing  a picture with Jim Marshall on his iPad.

About the Dio gig:

Talking about being a guitar teacher back in the 80s:

About a year and a half ago, I saw Doug, Brian Tichy, Michael Devin, and Keith St John rock the Whisky.   That was fantastic