I really enjoyed Ali Handal’s clinic at GO DPS MUSIC and came away learning quite a bit. 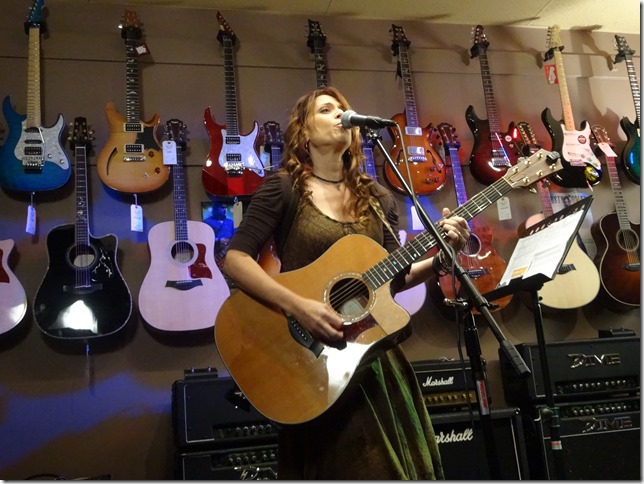 Ali came out and played a cool tune called “The World Don’t Owe You A Thing”, where incorporates part of a Steve Miller tune (“Fly Like An Eagle”) and does some cool guitar percussion.  She even has a scratch plate on her Taylor.    Groovy.  Not only does she have a great voice, but she’s very musical as well.    She followed her song up with a discussion about learning, writing and performing music. 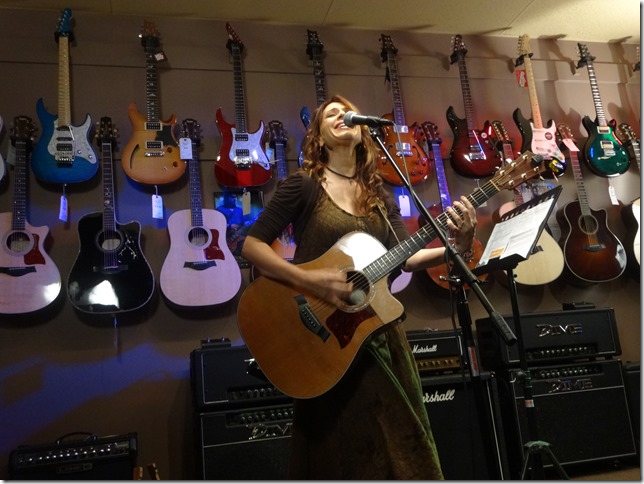 There were a lot of thought-provoking musical questions where I couldn’t exactly give an answer to right away.   There were questions about inspiration, songwriting, talent and many other questions that more musicians should probably ask themselves.   And she gave good, honest answers from the interactive Q&A.   Among other things, she was very up front about making it in the business and how it’s not the easiest route to take.

She did her own take on a Natalie Imbruglia tune (“Torn” – I had to look title that up – it has good lyrics) and talked about another version of the song by the writer.   And, at the request of the audience, she incorporated some Led Zeppelin (“Over The Hills and Far Away”) into one of her songs.  That rocked.

Ali encouraged audience participation and had a couple of back up singer for the song about her cat, Indy.  She played a rocking riff in drop D and then audience “meowed” during parts of the song.  Classic.

Ali also mentioned that she likes to play at the Roxy and does the yearly WesFest in March (for a Berklee music scholarship in memory Wes Wehmiller, who was a fantastic bass player).    I meant to ask Ali what her favorite concert was, but it ended before I got around to it.

I had to take a close up picture of this PRS that had been staring at me during the show.   That’s a beautiful guitar.

When Ali was signing stuff after the show, I told her how my 5 year old wanted to be there, but wasn’t feeling well enough to go.

Ali gave me some postcards, stickers, a pic card, and a MEOW! bracelet to take home to her.   Thanks!!