This was a solid show to start the new season of The World’s Greatest Tribute Bands.

In addition to playing a bunch of songs that appeared on the “Changesbowie” album, there were many surprises in the season 2 opener for TWGTB.

Katie Daryl introduced David and the show began with “Fame”, which got the place rocking.

David Brighton did a fantastic and very convincing job playing Bowie tunes from each era, complete with costumes changes and special guests.  He and his very capable band then launched into “Young Americans” and “Golden Years”.

Mick Adams from The Ultimate Stones came out and sang “Dancing In The Streets”, which really took the crowd by surprise. Given its normal format, the show went to a relatively early commercial break.

Katie took the stage and the curtain closed momentarily. 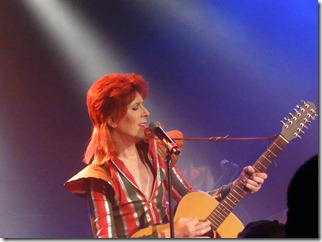 From there, they played “Suffragette City” and “The Jean Genie”

An extended guitar solo allowed more time for another costume change and another group of tunes that started with “Let’s Dance” and “China Girl” from the early 80s.

Another highlight of the show was an appearance by Freddie Mercury (Gregory Finsley from Queen Nation).  He came out and performed a rocking version of “Under Pressure”.

Then the band closed out the live telecast with “Heroes”, where  Katie came onstage and said goodnight to the TV crowd.

The best part?  Katie said they were going to play one more song played as they went off air and they closed the show with “Modern Love”.

This was a great way to start the season and sets the bar way high for the rest of the performers in season 2.

Next week?  The Police Experience.   This should be another outstanding show.