I met Al Velasquez, Jr. at a concert/ improvisational performance by Terry Bozzio, Allan Holdsworth, Tony Levin and Pat Mastelotto in Whittier, CA in January of 2010.    All that talent and Terry’s monstrous drum kit barely fit up on that stage!

Al has been giving my friend’s son drum lessons for years.   He brought along some of his students and Dean Zimmer.   I had seen Dean play almost 20 years ago in Ventura at a Battle of the Bands.   I just remembered that’s actually one of the first concert reviews I ever wrote.   There were always great stories around town of the “Woodland Hills Drum Club”, of which he was a member.

Anyhow, I ended up getting to know Dean and Al that evening and we got to hang out backstage after the show.   In additional to Al and Dean, there were many other incredible musicians in attendance.     Being all excited,  I took a bunch of horrible pictures on my 3G iPhone and that actually became my first “real” concert blog post.

(I grabbed the above pic off of Al’s FB page – it’s better than any pic I got that evening-this is probably the best pic I got of the evening: 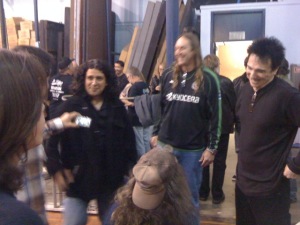 Over the last few years, I’ve come to know Al as a truly incredible musician and person.     I have caught several of his performances with Heavy Mellow and he even gave my daughter a drum lesson once to get her going.   His passion for making music and his commitment to developing his students’ drumming is just exceptional. 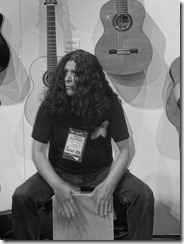 I see Dean around town quite often and have ran into him at a few shows.

We hung out after Y&T on Thursday night and when he told me he was playing a Thin Lizzy song at Al’s show at Pirates, I changed my weekend plans so my daughter and I could attend the event.

We got there right as Al was introducing the first song.    I noticed a familiar face up onstage in Luis Villegas, who is one-half of the Heavy Mellow virtuoso guitar duo.    I’d never seen Luis play electric guitar before, so that was cool

Hearing young musicians play “Midnight Rider” by The Allman Brothers was great.  That’s a wonderful song and their version was quite enjoyable.  Given the ages of the drummers, the song selections were rather mature for their ages (and I don’t mean “mature” in an inappropriate way – I just didn’t think kids jammed to some of the songs I grew up on, so that was great to find out….)

As Al mentioned, most of the songs were classic rock in nature (Led Zeppelin, The Beatles, etc.), with a “heavy” song by Disturbed and a punk rock tune thrown in for good measure.   My daughter and I  really rocked out to the Van Halen tune. 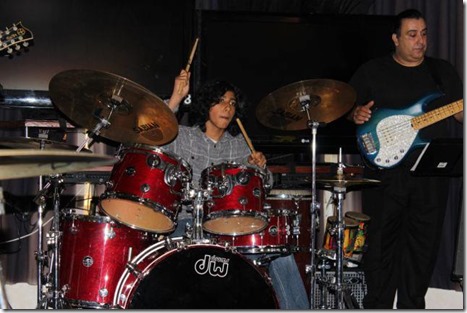 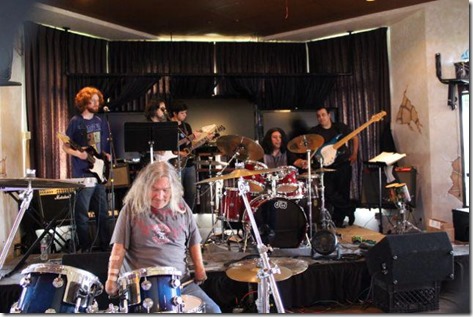 6 above photos by Gloria Villegas

Along with his student on drums, Al performed “Jukebox Hero” twice on the keyboard.   The family that came to watch the performance traveled from afar and missed when they originally played it, so later in the show, they did it again.

Al gave a very cool introduction of Dean just before the band tore into “The Boys are Back IN Town” by Thin Lizzy.

Seeing Dean play again after all these years sure was a cool experience.   He totally rocked it.

Other VIDEOS from the event:

This student of Al’s wowed the crowd with an exceptional version of an AFI song.

I took pictures of Luis, who was taking pictures….

All of the students’ performances were excellent.   There were so many proud parents and happy students that were all glowing as they each got off the stage.

Seeing songs performed by Al’s and Luis’ kids was a lot of fun.   It was cool to look over and look at how happy they were from watching them play.

Al did a great job hosting and kept the event moving at an appropriate pace.  The time flew by.   It was a great way to spend a Saturday afternoon and it’s good to know that the next generation will keep rocking on.