Having Having just played on 3 consecutive cruises (Monsters of Rock, Cruise to the Edge, and Moody Blues Cruise), they delighted old and new fans with their musicianship and clever musical arrangements. 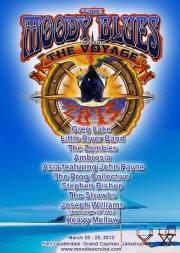 Joined by percussion master Mike Bennett, they played a thrilling performance of songs in an extended set at the Hard Rock Hollywood.   Ben, Luis and Mike performed together at the HRC Hollywood last November.   This is a nice, big room for live music with an excellent sound system, which nicely showcases this band.  And, like last time, this was another incredible show.

Just hearing Ben and Luis warm up on stage for the show is a show in itself.   Luis’ speed picking is reminiscent of Al DiMeola and Ben’s flamenco extraordinary flamenco techniques, such as his “sweep picking” and arpeggios, is a sight and sound to behold.

That’s Shane Tucker pictured behind Ben in the picture above.  Shane is the Stage Manager for the Hard Rock – he’s a great guy and he really knows his stuff.  Credit him and music guru Noelle Kim Retes (on the right below) for making these Heavy Mellow shows happen at the Hard Rock Cafe Hollywood.

This music seems to move everyone that hears it and is especially of interest to fans of guitar music.   Whether or not you like metal and are familiar with the songs they play, the music itself can be appreciated by practically anyone.

Here is the list of songs they had at their disposal to play for the evening.

Highlights of the set were “Over The Mountain” (what a brilliant version of the Ozzy classic), “Rainbow In the Dark” (another genius arrangement), “Sails of Charon” (neo-classical greatness flamenco style), “Holy Wars” (the way they play the intro is magnificent and the Middle Eastern type lead in the middle of the song sounds wonderful),and a very polished of “Cemetary Gates”.

They even took a break from the “metal theme” for a song and played a tremendously cool surf medley.

They played over half of these songs live and everyone in attendance was quite amazed.

Ben and Luis are both prolific artists.  Their work with Heavy Mellow, along with their respective works, are all quite astonishing.  Ben has around a dozen solo albums and Luis’ new album comes out towards the end of the month. 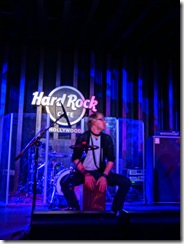